About Yoga TherapyYoga therapy is a "narrowly focused" yoga, which synthesizes knowledge of modern medicine and physiology with ancient yogic knowledge about a person and is aimed at eliminating a particular disease…

Between us girls …. On the practice of yoga on critical days 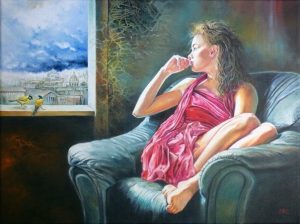 At some intervals, I encounter the need to explain to beautiful yogis about practice on critical days. There are many opinions, many myths about this. I hope that my opinion – the opinion of a certified yoga therapist will be heard and many girls and women will protect themselves from trouble … and maybe even from trouble.

So, knowledge is, as you know, power. Let’s figure out what’s what. Only dry scientific facts. What happens physiologically during menstruation?
Firstly, the hormonal background changes sharply, the level of progesterone is already low, and estrogen is still low. Secondly, the basal body temperature drops by several tenths of a degree, the immune system is slightly weakened. The internal mucous layer of the uterus-endometrium – without waiting for a fertilized egg, exfoliates and is removed from the body to the outside. All this is subtly controlled by a complex system of nerve reflexes and hormones. Yoga has a powerful effect on the endocrine system, but we are mainly unable to perceive this effect at the time of practice. Usually it appears later, as a result.
Unfortunately, far from all yoga studios and classes, teachers mention the ban on inverted asanas during menstruation. And sometimes they even directly say that it is not forbidden, “out of health.” Well, what’s the truth of this, if we stand upside down on a “special day”? By the way, ANY asanas, where the pelvis is above the head, are considered as inverted asanas. Yes, yes, girls, and the Dog muzzles down to them, and padahastasana and uttanasana – in the form of a deep inclination to the legs and hedgehogs with them. Is it a ban from the bulldozer? out of harm, so that women are infringed on their rights and cannot practice on a par with men ?! I hope the irony is read 🙂 but now we’ll even put the topic “equality vs femininity” behind the plinth and again turn to harsh anatomy and physics. Standing upside down, we radically changed the gravity in the body. Yes, gravity acts on us 24 hours a day and acts on each of your internal organs individually. The uterus, it is, as it were, in a spherical vacumum not suspended. Gravity in the body is now turned upside down and everything that needs to exit flows back into the interior. “What should come out” is the dead cells of the endometrium, in which the process of reproduction of putrefactive bacteria and other pathogenic flora is already beginning. Well, you know how it smells – it doesn’t smell like violets. This is the very compote of bio-waste you force to drain not down, but “up”, towards the head, creating at the same time a great likelihood of menstrual blood being thrown into the tubes (especially with synchronous bandhas), and then it can get into the abdominal cavity which is FREE communicates with the uterus. Further, the scenario develops as you like from inflammatory foci and subsequent adhesions to endometriosis, an incurable mysterious sore leading to infertility. By the way, they do not engage in sex during menstruation for the same reason (except ethical and religious) – because of the risk of menstrual blood being thrown into the tubes during orgasm. If someone objected to me that they said, “I did it a hundred times, and nothing” – I would be glad for such a man that he was carried through very large and shook his hand with his guardian angel. Dude is cool. From an energy point of view, the apan energy is engaged in the removal of all unnecessary from the body. It is she who is active during menstruation. By performing asanas that change the current of apans (read: inverted asanas, bandhas); – again, we impede the natural course of things.
In addition to inverted asanas during menstruation, you should not do bandha: uddiyana and mulabandha, as well as active types of breathing that dramatically change the pressure in the abdominal cavity (kapalabhati, bhastrika and their derivatives). For the same reason, increase the pressure in the abdominal cavity, exclude rigid closed twists, active deflections lying on the stomach, asanas “on the press” – paripurna navasana. Girls, understand that with all of the above practices you interfere with the natural course of things! By the way, if you nevertheless practiced inverted positions during your period, you must have noticed that after classes the discharge stops very quickly. Yes, indeed, when turning over, a certain reflex is triggered and the discharge decreases until it disappears. I somehow came across a text (alas, I don’t remember the source) about Chinese nuns in Tibet who expelled the red dragon by the practice of inverted asanas during menstruation. Well, they did. Forever. If you are not a nun and want to have children, maybe not?

For plus or minus 28 days, a woman experiences 4 seasons, 4 conditions due to her hormonal background. So, menstruation is “winter” in a woman’s monthly cycle. In winter, we usually want comfort, warmth, care, silence, perhaps even solitude. Winter is a very Yin and introvert time. Therefore, to live a tunic with its feminine nature and energy, it would be nice to reckon with this. Slow down.The practice of yoga in this main period should consist of relaxing asanas, yoga nidra, asanas, revealing the hip joints. (upavishtha konasana, balasana, malasana, supta baddha konasana, cat, janushirshasana (can be supported under the forehead). By the way, these asanas will also help relieve painful sensations. Think about what pushes you to stand on your head on an “inappropriate” day? – ego , vanity, neglect of your body? Dear girls, you understand that this is not all about yoga, right? 🙂 After all, yoga teaches us to proceed from our nature, teaches us to hear the body, love it, trust … Be beautiful and healthy!