The purpose of yoga. Ashtanga Yoga Patanjali (part 2)The importance of asanas in yoga practice So, yoga classes begin with oneself, with one’s lifestyle and with a restructuring of one’s thinking. Yoga is primarily an internal individual work… 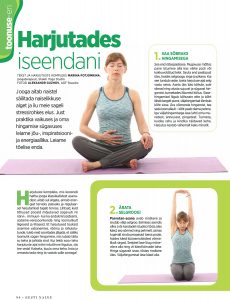 Vinyasa
Vinyasa is a way of synchronizing breathing and movement. There is one breathing cycle per movement. For all asanas, a certain amount of vinyasas is established.
The purpose of vinyasa is internal purification. Breathing and movements performed simultaneously with asanas cause the blood to become hot, or, as Sri K. Pattabhi Jois says, “make the blood boil.” Stagnant thick blood is dirty and causes various diseases in the body. The heat produced by yoga purifies the blood and makes it fluid so that it can circulate without difficulty. The combination of asanas with movement and breathing allows blood to freely reach all joints, taking away pain from the body. In case of insufficient circulation, pain occurs. Heated blood also passes through all internal organs, removing impurities and diseases that are eliminated from the body through sweat during practice.

Ujayi breath
Our life and health, as well as the ability to control the mind, depend on breathing. Therefore, it is not surprising that breathing control is one of the main components of practice.
The breath used in Ashtanga Yoga is known as Ujayi, which means “victorious.” It is characterized by a peculiar hissing sound that occurs in the larynx when inhaling and exhaling and resembles a surf or the sound of the wind. The controlled narrowing of the glottis allows you to set the duration and intensity of inspirations and exhalations that correspond to the asana and supply the body with the right amount of oxygen: the body is filled with fresh energy and heat is generated sufficient for good perspiration.
Bandha
Bandhi act on the energy currents of the subtle body – prana and vayu. A bandha or castle does not allow prana to dissipate and directs it to the nadi (energy channels). The body is cleansed, filled with vigor and energy. In asanas, bandhas also serve as a fulcrum, which allows you to redistribute weight, making some parts of the body light, others heavy. This helps to properly master asanas. Working with bandhas strengthens deep muscles, improves stability and flexibility. Performing an asana becomes easier. Bandha protect the internal organs, and also cleanse and normalize the digestive system.
In the practice of asanas, two bandhas are used: mula (root castle) and uddiyana (castle of the abdominal region). Performing asanas, the mula bandha is pulled to the navel, where it is combined with the uddiyana bandha, which is pressed to the spine and lifted.
It is important that in asanas and vinyasas bandhas are used with different intensities. Closely monitor the state of the bandhas: usually they are held with moderate force, but in some cases they need to be slightly released, in some – squeeze as much as possible.

Drishti
In Ashtanga yoga, holding the asana, it is customary to look at a certain point – Drishti. When drishti is performed, the mind becomes concentrated, immersing the disciples “inward”. This inner concentration leads to the development of concentration (Dharana) and meditation (Dhyana) – the sixth and seventh steps of Ashtanga Yoga, described by Patanjali in the Yoga Sutras. ”
Mantras
In Ashtanga yoga, mantras are traditionally recited aloud at the beginning and end of practice.
Opening Mantra:
Om
vande gurunam caranaravinde
sandarsita-svatma-sukhavabodhe
nihsreyase jangalikayamane
samsara-halahala-moha-santyai
abahu-purusakaram sankha-cakrasi-dharinam
sahasra-sirasam svetam pranamami patanjalim
Om
***
Ohm
I pray the lotus feet of the supreme guru
Who teaches knowledge, granting happiness from the disclosure of the Self,
Who acts like a healer and is able to eliminate
Misconceptions caused by the poison of conditional existence.
I salute the sage Patanjali –
(in its divine form), one thousand-headed, below the shoulders of a shaped
a man holding a conch, disk and sword.
Ohm
!!! Translation reflects only the approximate meaning of the mantra.
Closing Mantra:
Om
svasti prajabhyah paripalayantam
nyayena margena mahim mahisah
go-brahmanebhyah subham astu nityam
lokah samastah sukhino bhavantu
Om santih santih santih om
***
Ohm
May prosperity be glorified
May rulers rule the world lawfully and fairly
May all sacred be protected
And may the people of the world be happy and rich
Om world, world, Om world