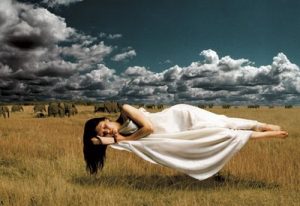 Do you agree with the statement that relaxation for modern Westerners is an art that needs to be learned? Or are you convinced that relaxing means coming home, leaning back in an armchair, closing your eyes … Maybe splashing something relaxing in a glass or turning on a relaxing TV / computer? Many believe that it is enough to go to bed and relaxation will come automatically. But why, then, having overslept a seemingly sufficient number of hours, do you wake up tired and broken? Stress becomes habitual, we stop noticing it until it “shoots” with increased pressure, asthma, an ulcer or other bad sore. Thoughts, anxieties and worries are brewed in the head even at night, burdening dreams. Yogis call this dream “Nidra.” But there is another type of sleep, free of burden – this is YOGA NIDRA or yogic dream or “dream without dreams” as it is also called.

This special “dream” not only gives real deep relaxation to the body, but also frees the mind and soul from the shackles. Its main feature is that you achieve a state of deep sleep while remaining conscious.
The basis of Nidra yoga is the ancient tantric practice of nyasa, which requires fixing the consciousness at certain points of the body and knowledge of many special mantras corresponding to each part of the body. Nyasa was practiced while sitting and used in ritual practices to sanctify the physical body, that is, they “saturate” the body in this way with a higher divine consciousness. All this is too complicated and too mysterious for a rational and skeptical “Western” mind. Therefore, the great yoga teacher Swami Satyananda Saraswati, the founder of the Bihar Yoga School, reworked, adapted the complex tantric techniques of relaxation and working with consciousness so that it became accessible to our perception.
Yoga Nidra in its modern form is a systematic method of complete physical, mental, emotional relaxation, with incredible restorative power. According to the effects on the body and mind, one hour of yoga nidra is equivalent to 4 hours of sound healthy sleep. Today, yoga nidra is used for various purposes: with its help you can increase your creative abilities, transform your personality, habits, character traits and heal your body. This is the science of true yogic self-transformation.

WHAT HAPPENS WITH CONSCIOUSNESS IN YOGA NIDRA?
The state of the yoga nidra is similar to that subtle moment between reality and sleep, when you are already falling into a dream, but you are still able to perceive the surrounding reality with the edge of consciousness. You sort of separate yourself from the body and from the mind. At this moment, the door between the worlds is closing – balancing on the verge of reality and sleep, you gain access to the world of the subconscious and even the unconscious. The mind becomes plastic and flexible, the subconscious mind comes to the fore, which does not analyze, does not compare, does not reject. Any idea, thought sown at this moment on the fertile soil of the subconscious – necessarily grows over time and gives fruit in a conscious, awake life, in a rational consciousness. At the time of yoga nidra, the conditioning of prohibitions, complexes, prejudices disappears and you can make a real reconstruction of your character, eliminate bad habits.
In yoga nidra, the old matrices of habitual behavior and negative beliefs are burned, the traumatic experience is the so-called “Samskaras,” and we stand new, harmonious and positive beliefs and patterns of behavior.
Yoga nidra can be used to expand your abilities or find answers and tips for the most intimate questions. Yoga nidra is an immersion in one’s inner cosmos, a space where there is no more split consciousness, but a whole human personality. This is the place where you find your true nature, your essence, your present, radiant and pure divine Self.
An attentive and critical reader may ask – it turns out that yoga nidra is hypnosis? But what if, at the time I became most receptive, someone would put a manipulative idea or thought in my head?
Yoga nidra is, of course, an altered, trance state of consciousness, but it is not hypnosis.
In yoga nidra, consciousness becomes unidirectional and there is a danger of falling asleep with an ordinary dream, therefore consciousness is maintained by fixation on the auditory canal, while other organs of communication with the outside world are blocked, as is communication with the cerebral cortex. Thus, not one auditory impulse can be realized. Then comes the state when all the senses are distracted from the external perception and are attracted to the internal perception – there arises the “pratyahara” – the fifth stage of yoga. Despite the fact that yoga and hypnosis have a common beginning – relaxation and susceptibility – in the future they diverge and each of them follows its own special way. With the help of yoga nidra, consciousness penetrates into a sphere inaccessible to hypnosis. In yoga nidra, the refrain “don’t sleep,” constantly sounds, and your consciousness can go as far as you dare to go forward.

The purpose of yoga. Ashtanga Yoga Patanjali (part 1)In order to achieve any goal, you need to clearly see this goal in front of you. Therefore, in order for the practice of yoga to be fruitful, you need…